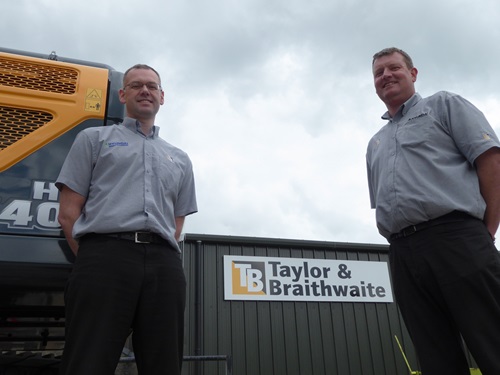 The company’s roots were firmly in the agricultural market

Back in the day the company (T&B) was focused solely on agricultural machinery and Mr Taylor remembers the first ever machine sold, which was a Massey Ferguson 135 tractor which was sold to Beckwith’s at New Hall in 1968, for the sum of £805.00!  Farming company, W G L Soulsby & Sons, also based in Cumbria, was T&B’s first big customer who started with the purchase of one machine and went on to buy all their fleet of machines and equipment from the company.

Business expansion for Taylor and Braithwaite

In 1971 Taylor & Braithwaite decided it was time to expand and so Harold Taylor purchased a farm at Flitholme Cumbria for £5,100 which included 25 acres.  A workshop was created and the company began carrying out repairs to 2nd hand agricultural machines.

In the early days, Mr Taylor and Mr Braithwaite were looking after both sales and service – but this had to be reviewed when they both sold the same machine to different customers on the same day – and they only had one machine to sell!  So, to avoid any further sales calamities, in 1984 Mr Taylor took over the running of the office and stores and Mr Braithwaite looked after the sales side of the business.

New brands and the arrival of John Deere

It was also in 1992 T&B expanded further and the company invested in new premises at Sandford to enable the business to work more efficiently in line with undertaking the new John Deere franchise.  The land on this new site also enabled customers to demo new machinery before they committed to buy!

When Britain declared itself free of foot-and-mouth in 2002 T&B began selling both new and used plant as more contractors began operating and the demand for machinery was high.

The company remained almost 100% focused on agricultural machinery until director, Ian Burton joined the company back in 2005 – Ian took over Mr. Braithwaite’s role. Mr Burton looks after the sales side of the business and Paul Taylor, Harold Taylor’s son, is responsible for aftersales although they work very much as a team.

Today the company’s business is more than 95% dedicated to construction machinery.  Ian Burton contacted Hyundai in 2009, which was at the height of the economic recession.

Mr Burton said “Not many people were jumping up and down at this point to sell excavators, but I saw it as a great opportunity to enter into this industry whilst it was still quiet to build ourselves up for when the market recovered.  From this point on the business grew.

The reason we chose Hyundai as a brand was because they manufactured a comprehensive range of machinery which included both heavy-line machines alongside the midi and mini ranges.  They didn’t have any dealer representation in the area that we covered so it was a good move on behalf of both companies.”

It was in September 2009 Mr Burton met with the Hyundai team in Belgium to discuss taking on the Hyundai dealership.  The company officially began trading in Hyundai in January 2010 with the -7A machines.

Since then the company has gone from strength to strength and the company is the approved dealer for leading brands including Maximus Crushing & Screening, Wacker Neuson for small plant, ProDem, Stihl and Yamaha.  Mr Burton said, “We really have kept Hyundai as our main franchise and that’s where most our turnover is generated from.  The addition of these newer franchises now enables us though to offer a depth of quality machinery and equipment to our customers that compliments the Hyundai range”


Mr. Burton added, “We forecast to sell 12 Hyundai’s in the first year of trading and we managed to sell double that with 24 machines going out in 2010. The following year we sold 49 machines and then 60 – we in fact doubled what we set out to do!  We thought selling 50 tractors and 50 excavators per year was a very nice and profitable little business – we well exceeded this. We are now selling around 100 Hyundai machines a year on average – we predict we will continue to in the treble figures each year. Last year we celebrated selling our 500th Hyundai machine.”

Giving up the John Deere franchise

It was in 2011 T&B let the John Deere franchise go – the company did not agree with the way John Deere was changing the way it wanted to work with its dealers.  Mr Burton reported, “In 2011 the construction equipment side of the business really took off – we put all of our efforts into this side of the business.  Giving up John Deere was not an easy decision to make – we had a lot of sleepless nights over it.  We were in effect giving up a world-leading brand to concentrate our efforts on a lesser known construction brand - it was a real gamble.  But I could not see the future in their dealer model for our area.”


The Hyundai brand up with its competitors

T& B director Paul Taylor said, “Since the arrival of the -7A machines the Hyundai brand has improved massively!  The machines were always very reliable - but they lacked finesse and were a tad old fashioned in comparison to competitors’ brands.  Hyundai needed to up their game to keep up with the other brands in the market.  They have succeeded with this ten-fold - Hyundai It is now a well received and recognized brand.”

Mr Burton added, “Every time Hyundai bring out a new range they are another step forward with new technology that they incorporate into the machines – you could put Hyundai head to head with any of the competing brands and they would be up there with the best. The new AAVM viewing system is also a huge step forward and something that the other brands need to be introducing factory fitted and not retro-fitted.  Brand snobbery is still an issue but we are addressing this.”

Mr Burton said, “Our biggest achievement I believe is successfully changing from 100% agricultural machinery to over 95% construction machinery – completely changing industry.  If we had not made the change the company (T&B) would not be here now and we would have been swallowed up in the John Deere corporate company – we would be a small cog in a big wheel.

We have worked hard since the decision was made to change industries and are now able to offer a really strong and complimentary range of products and equipment that offers something for the smallest to the biggest customer.”

“Our original mission statement was to build and maintain a sound customer base and we stand by that today.” Added Mr Taylor.  “We like to have happy customers and offer them value for money.  We also need to have 110% confidence in a product to be able to sell it. We always look to grow long term relationships and we are a company where the directors are always on the end of the phone – we make decisions quickly – and work directly with all our customers.  A good sound back up service is also key and a sound investment. We are fortunate in that we have a team of staff who are extremely knowledgeable and take a lot of pride in the work that they do.”

We also have a loyal customer base that we have built up over the years. We spend time understanding their needs and make sure that the equipment that we supply is fit for purpose.  This reputation has enabled us to grow and attract new customers, often through the recommendation of existing ones – so we must be doing something right”

As part of Taylor & Braithwaite’s 50th anniversary celebrations the company is hosting a ‘50th Anniversary Charity Celebration Ball’ which will take place on 6th October 2017 at the prestigious Low Wood Bay Resort & Spa located on Lake Windermere in the Lake District.  The company is hoping to raise between 25 – 30K for Cancer Research UK.

240 guests have been invited from Taylor & Braithwaite’s customer base and industry contacts.  There are 24 tables available and already 21 have been snapped up by supporters.  There will also be an Auction of Promises at the event to raise further funds for the Cancer charity.

Mr Burton said, “Cancer Research UK is a very appropriate charity to choose as unfortunately we have all been affected by this disease either directly or indirectly so we delighted we are able to host a ball to raise funds at the same time as celebrating our 50th anniversary.”

Taylor & Braithwaite can be contacted on 017683 41400. Visit the website for more information on the company www.t-and-b.co.uk