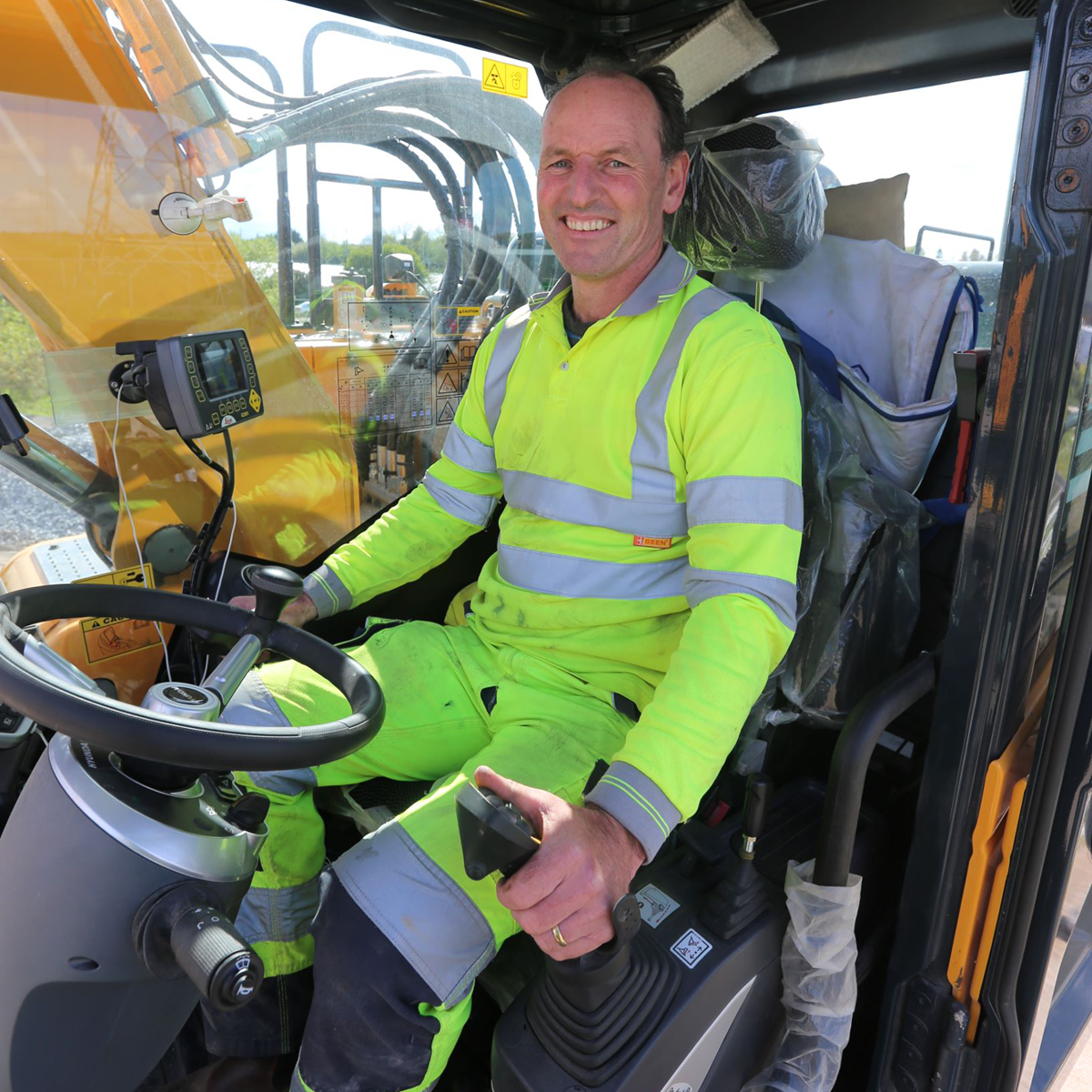 Working on a number of major infrastructure projects across Ireland, owner operator Richard Collins, of Collins Plant Hire, knows more than most the importance of both flexibility and reliability in excavation work. Richard has recently invested in a brand-new Hyundai HW140 wheeled excavator, with an operating weight of 13880 kg. Richard purchased the machine from Hyundai CE dealer Whelan Plant Sales, based in the Carrowdotia, County Clare.

The machine was supplied as a package from Whelan Plant Sales complete with an Engcon EC219 tiltrotator, which was retrofitted in Whelan’s yard, in addition to a Leica iCON iXE2 2D machine control system, supplied and fitted by Eoin Genochi, a Leica Machine Control Technician at Levelling Equipment Services (LES), based in County Kildare.

Richard commented on his decision to buy a Hyundai CE excavator, he said; “I bought my first Hyundai, a dash 7 model, from Whelan back in 2004 and I found that it was a reliable and a very good machine – which I kept for seven years! I then traded this machine in for another dash 9 Hyundai, which I was operating until earlier this year, when I then made the decision to purchase a brand-new Hyundai to keep up with my increasing work schedule.”

“There were a number of factors that led me to buy the new Hyundai, in addition to a growth in work contracts. Firstly, it was the dealer - Whelan is a fantastic company to deal with and they offer a ‘second to none’ service – and I know that the Hyundai excavator is a great machine. The price was also very good, as was the finance package offered by Whelan.

I find that Hyundai’s are real ‘drivers’ machines – it’s very comfortable in the cab which is important if you’re working in the cab all day – I have already clocked up 1000 hours in a matter of months!

I specialise in roadworks, so I decided that the wheeled excavator was the best machine for me. There are very few ‘wheeled excavator’ owner-operators in the country, so I find I get a lot more hire work and at a far better rate than on a tracked machine - particularly with the Engcon tiltrotator attachment and Leica system additions.” Added Richard.

“I was approached by Eoin at Levelling Equipment Services (LES) in regard to the Leica system and we met, and I decided that the 2D excavator machine control system was the perfect addition for the Hyundai excavator and would complement the Engcon tiltrotator. The service I received from LES and Eoin, in particular, was amazing – I could not fault his work or attention to detail.”

The Leica 2D system allows multiple elevations and slopes to be constructed, at any orientation without resetting the machine or laser height. The iCON iXE2 also provides integrated tilt rotator support, giving the operator clear guidance information about the actual tilt and rotation position relative to the job.

Richard continued; “My work is predominantly focused on infrastructure upgrades, such as roadworks and large-scale civil engineering projects. As such, a lot of the work I carry out takes place in confined spaces, like the sidings of busy motorways for example, so I need my machine to be as flexible, responsive and as safe as possible. Which is why I also specified Hyundai’s AAVM (All Around View Monitoring) camera system, and I would recommend it to anybody.  It’s very effective for me as I am always on the move and there can be a lot of people working around me in close proximity to the machine – this system keeps them and me safe!  It’s also good to prevent the machine getting damaged working in confined spaces as you have a 360-degree view and a birds eye view of your surroundings.”

Talking about the Engcon system Richard said, “I’ve been aware of the benefits of tiltrotators for some time, but Engcon is the first manufacturer to supply me with a unit which enables me to really explore their full potential. The productivity benefit of the EC219 was particularly brought home to me in a job I completed in County Cork.

I was working as part of a team doing some major drainage operations in the region. Before the tiltrotator arrived on site, the crew were clearing between 80 and 90 metres per day. After we started using the Hyundai with the tiltrotator installed, we more than doubled that to over 200 metres a day – dramatically reducing the amount of time we needed to spend on site and making valuable savings on labour.”

Richard concludes: “I know some operators are reluctant to invest in advanced systems - especially those working solo. However, I can honestly say that investing in the Engcon tiltrotator and the Leica 2D system to support my new Hyundai excavator, have proved to be worth every penny I spent on them!  Work smarter – not harder!  I am now able to complete work faster, to an even higher standard than before.”