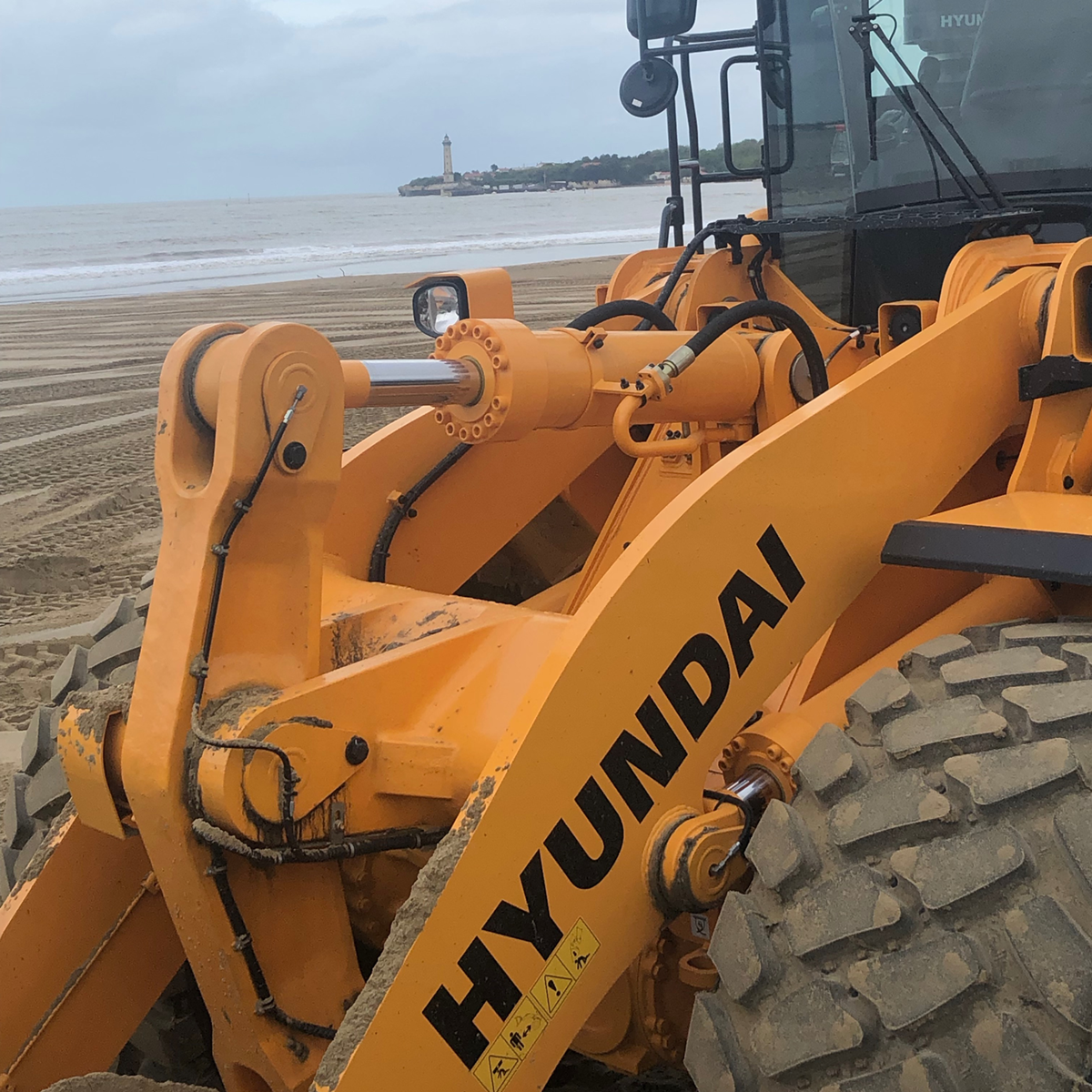 The small town of Saint Georges de Didonne (17) in south-west France has recently purchased, through Motard, a new HL970 wheel loader from Hyundai Construction Equipment to replace its ageing 25-year-old machine. Its main job is to clean and rake the town’s beaches - a job it will be carrying out for 7 months of the year.

Delivered to the town in Charente-Maritime on the west coast in April this year by Hyundai Construction Equipment’s agent MOTARD, the new machine has not gone unnoticed on the town’s beaches. Weighing in at 23.5 tons, and with its rounded curves and spanking new bodywork, it has been delighting beach-walkers - as well as its chief driver, Frédéric Audebert, 52, who has worked for the town since he was 16. This is a small town of just over 5,000 inhabitants in winter but ten times as many in summer.


As he does every year, Frédéric takes up his position on the beaches in April and right through to October he spends his time cleaning and smoothing the sand. "So, we start working on the beaches - levelling and cleaning - on 1st April through to 15 October. We also smooth over the sand to leave it clean and tidy for the equipment we put up for the summer season. This is when we also lift the wooden fences that we put in during the winter to stop the sand from blowing onto the roads and causing an obstruction. And even during the high season the wheel loader will be working every morning from 6 - 10 am, re-spreading the sand and filling in the holes that the holiday-makers dig," explained Frédéric Audeber.

The new acquisition for the town replaces their previous 25-year-old loader which had given excellent and loyal service but needed to be replaced. "We put the purchase of a new loader for the town out to public tender last September and we received two bids; one of them was from Motard who proposed this HL970 wheel loader from Hyundai Construction Equipment," said Noël Portier, fleet manager for the town of Saint Georges de Didonne.

This HL970 has been modified to suit the town’s requirements. It has been fitted with tyres adapted for use on sand - so they are wider than normal, "and we don’t pump them up fully so that they are softer," explained the driver. The wheel rims have also been adapted and a joystick control was added, "greatly appreciated" by Frédéric Audebert; a swash plate was also installed. Lastly, the loader received LED head lamps and a batten luminaire. "Since we start work on the beaches very early in the morning it is essential for us to have high performance lighting," he added.

And although it’s quite difficult for him to make a comparison between the two machines, since the HL970 is bigger than the old machine, Fréderic lends nothing but praise to the comfortable cab layout of the new loader, which has so far clocked up a hundred hours; he particularly appreciates the cameras. "The cabin is really comfortable, it’s well sound-proofed, and I definitely like the air conditioning in the summer. And it is very flexible in use," he continued.

As for productivity, with its bucket capacity of 4.20 m3, Fréderic continued by saying: "this machine is absolutely ideal for what we do. I can shift between 50 and 60 meters of sand every morning."