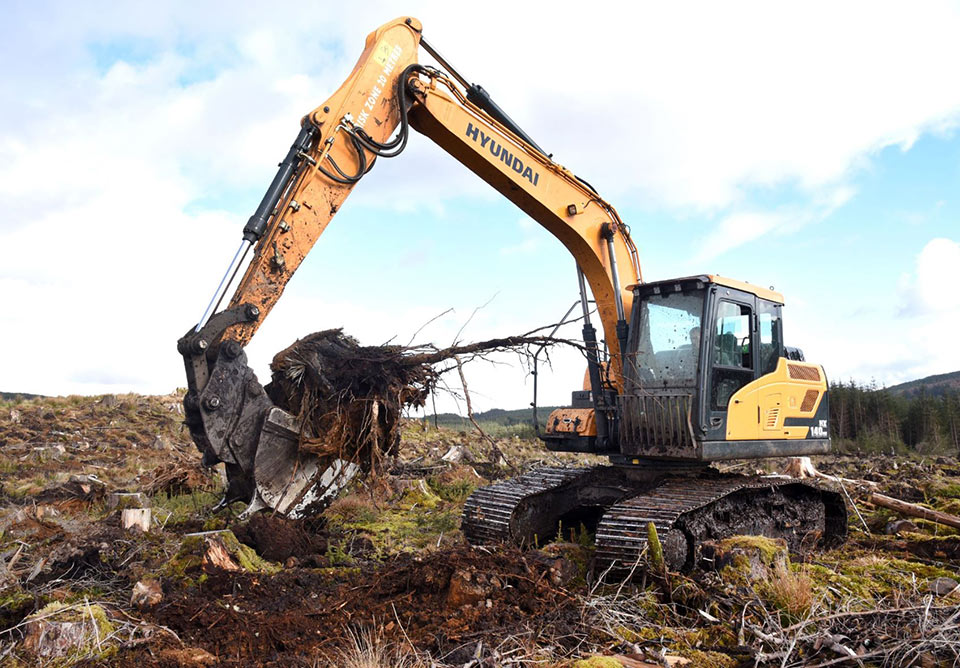 Carron Valley Plant Ltd is a forestry ground preparation business based in Dumfries in Scotland. Established some 30-years ago, the three-man firm, headed up by founder William Brown, is contracted to Forestry and Land Scotland, who is the Scottish Government agency responsible for managing the region’s national forests and land.

William has two 14 tonne, Hyundai forestry HX140 high-walker crawler excavators in his fleet, which are operated by Sammy McEwan, who has been with the company for three-years, and highly experienced newcomer Chris Chapman who operates the newest of the machines, which was purchased in November of last year from local Hyundai dealer Agritrac Exports.

“The Hyundai’s have proved to be much better than the machine’s I used to run” reported William Brown. “They are never idle and run from 6am to 6pm, Monday to Friday and we have no bother with them at all. They are very good on fuel too – the lads will get a day and a half’s work on just one tank.” Added William.

Carron Valley Plant is responsible for the ‘mounding’ or ground preparation for Forestry and Land Scotland. Ground preparation within the forest can be extremely difficult and challenging, which is why undertaking this kind of work, a company would need specially designed machines which enables them to work efficiently in this type of environment.

William continued, “The Hyundai high-walker (HX140HW) is delivered with full length track guards as standard – these fully cover the roller frame which prevents wood and forest waste getting into the tracks. The machine’s ground clearance is 600mm to the turret plate, which enables it to clear the height of wood stumps. For extra protection on my machines I also ordered reinforced belly plates, a half guard for the front window and extra lights.”

Should workload be particularly high, William will hire in another high-walker from Agritrac Exports, and jump in the saddle himself. William is a long-term friend of Agritrac’s sales manager, Leigh Dalgleish who he met around 10-years ago when Leigh was working for a competitor’s dealership.

William and Leigh remained pals and it was down to Leigh that William converted from his original brand of forestry excavator to the Hyundai high-walker – purchasing his first machine four-years ago, from then Hyundai dealer, Young Plant Sales, where Leigh was then based. His second machine was purchased from Leigh when he moved to Agritrac Exports.

“The operators also really rate the machines highly” added William. “Sammy has said that the Hyundai is the best machine he’s ever had the opportunity to operate – and when doing a 12-hour shift – this is important! The machines are powerful, sturdy and the wide pads give the machines extra stability for working in often very marshy conditions – I can’t really fault them!”