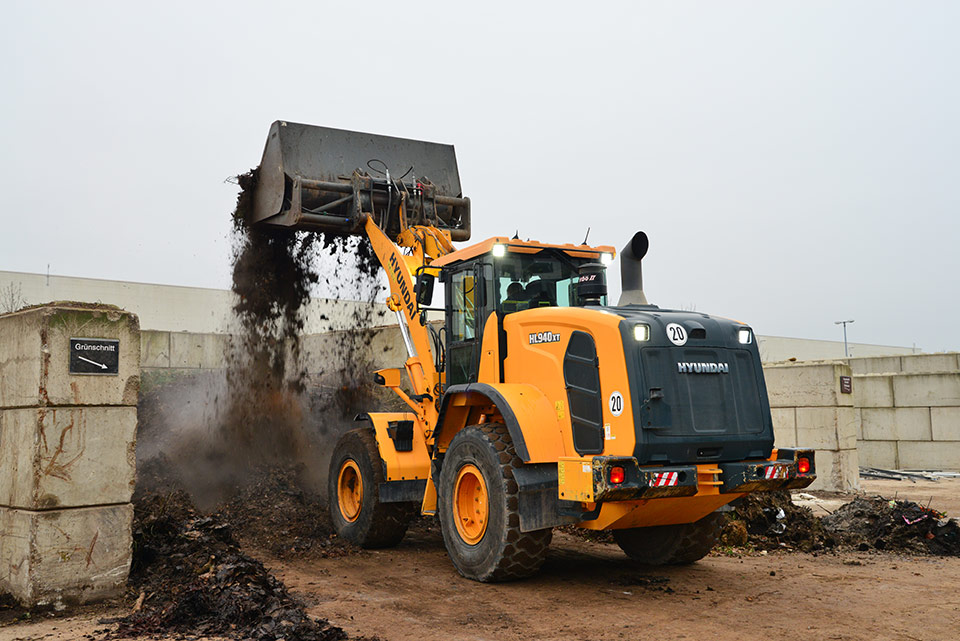 Kremer Recycling in Löbnitz near Köthen can look back on a history of over 100 years. It started with agricultural technology and a container service in Velen (North Rhine-Westphalia) and after German reunification (1993) it was established on the 4-hectare company site in Löbnitz a.d. Linde The core business is collecting, transporting, recycling, sorting and processing commercial and domestic refuse, waste processing, storage and crushing of industrial waste, building waste, wood and other materials.

For three years a 14 ton HL940XT Hyundai wheeled loader of 114 kW power has been operating on the spacious site. With the annual mileage becoming ever greater, director Johannes Kremer decided to order a second wheeled loader of the same type from the Hyundai licensed dealer Tecklenborg Baumaschinen in Leisnig. "We are happy with the performance, consumption and, above all, Tecklenborg's very good and fast service, a decisive factor in our purchase decision", said Kremer. The business, with 30 staff members, is active both regionally and internationally, and has a fleet of 16 trucks and over 1,200 containers. Also, there is a further site in Velen, in Westphalia, with a similar scope and range of services. Things really need to happen there, large loads have to be handled, shredders and screening equipment loaded, trucks loaded and materials restacked in sorting boxes - up to 1,300 operating hours each for both the Hyundai wheel loaders and other transshipment machines per year, right on time.

The higher XT lifting mast (XT = extended lifting mast) gives both wheeled loaders a tipping height of 2,930 mm - that way, large dump trucks can also be loaded. The high-tipping version is a variant favoured for recycling use if large push floors are to be loaded. Combined with a hydraulic quick hitch and high-tip shovels (2.3 m3), both of the yellow Hyundais are the perfect recycling machines. Foam-filled tyres provide for safe working - the right choice for scrap and building waste - with the tyre sides particularly endangered. Simon Teubner is the responsible client adviser at Tecklenborg and has close contact with the client - the machinery, including several handling, earth-moving and mini diggers works with one or another Hyundai.

In addition to reduced consumption values, the new HL series is waiting with many further environmentally protective properties. Automatic motor switch-off keeps fuel consumption and emissions under strict control at the right time. The HL series switches off an idling motor. The operating mode and the motor idling time are adjustable by the driver according to the work conditions, which again increases efficiency.

In the H mode the ICCO Intelligent Clutch Cut-Off reduces the power lost at the torque converter. The lower heat production through ICCO is, overall, of benefit to the fuel efficiency. The hydraulic limited-slip differential both increases the productivity and has a fuel-saving effect by avoiding tyre slip.

Quiet, safe and comfortable, also 10% larger - the new ROPS/FOPS cab with fully adjustable seat gives the driver an ergonomic and very pleasant workplace. It has a high level of soundproofing and uses up-to-date noise-reducing techniques to ensure maximum quiet during work in noisy environments such as gravel pits or waste dumps. The new air-conditioning system maximises the heating or cooling performance with an optimised air flow in the cab. The electro-hydraulic joystick enables simple control of the accessories, which benefits productivity and reduces fatigue.

Operation of the 7-inch monitor is similar to using a smartphone display. For that, it is larger than in the previous models and easy to read. The sound system, including the radio, has an integrated Bluetooth hands-free device and a built-in microphone, with which the driver in the cab can take calls and deal with them. The infotainment system also enables the operator to use Miracast. With this system he can use the WLAN of his smartphone to put the functions of the mobile phone on the large screen - including navigation, internet surfing, and playing video and music. All models of the HL series can optionally have joystick steering.

The touchscreen monitor and electro-hydraulically controlled lever are used to adjust the soft end stop, shovel priority and stop position for the side arm and shovel.

The Soft End Stop reduces impacts and vibrations when an attachment approaches the end of its travel, and gives impact-free "arrival" by automatically reducing the speed of movement at this point. This function can be deactivated using the monitor.

All models of the HL900 series are fitted with a weighing system. It has automatic and manual settings and weighs individual shovel loads and total load weights with an accuracy of +/-1%