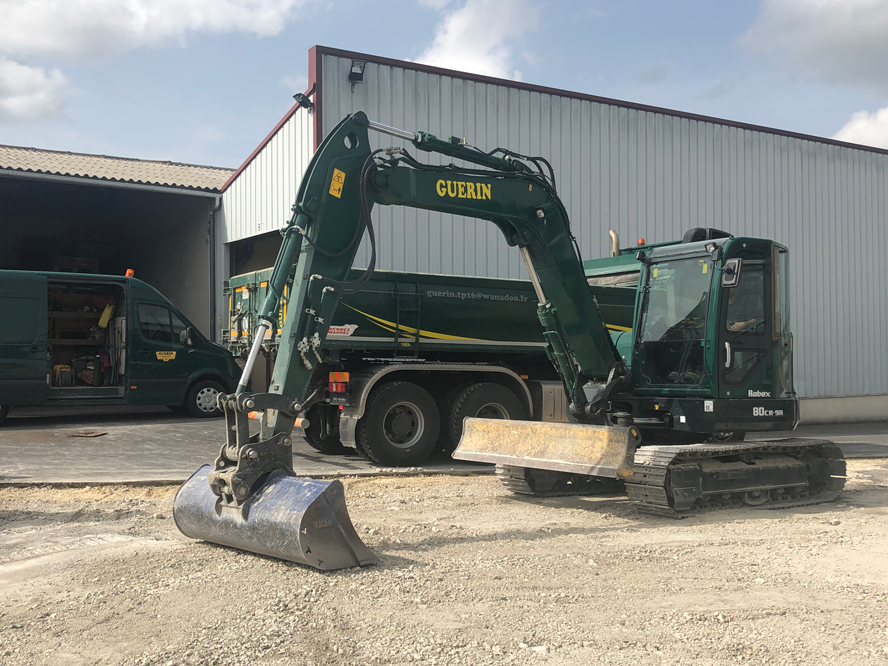 The Allary cooperage, located in Archiac, France (Department No. 17), is a family business that was founded in 1953 by Roger Allary, who, upon his retirement, handed over the reins to his son Jacky, who since childhood has been just as passionate about the business. During the 1960s, the cooperage worked primarily for the Cognac region, supplying Cognac producers with casks and barrels. However, over the years, the company grew and today designs barrels and cone-shaped vats with capacities varying from 1000 L to 20,000 L for ageing wine.

There is a long history between the Allary and GUERIN TP companies, as the public works company has undertaken works for many years at the cooperage. When Allary decided to construct a car park for their employees, Frédéric Guérin, Director of the company of the same name, was their go-to guy. "Here, we are doing the ground work for a 30-space car park with 1400 m2 of surfacing. We've already worked at the cooperage for extension, utilities and paving works, etc. We've been working for them for a long time", explains Frédéric Guérin.

GUERIN TP was founded in 1978 by Bernard Guérin, Frédéric's father. Frédéric joined the family business in 1991, going on to become Director in 2007 when his father retired. Located in Sireuil, France (region No. 16), some 15 kilometers from Angoulême, the company's initial activity revolved more around gas and electricity connection contract works for public authorities.

However, in 1998, the company took a new path, working in the wine industry, for Cognac companies, for example. "We are more focused on the Charente department and the highly influential wine production activities in the region, which today represents 70% of our customer portfolio. We undertake works as part of the wine production standardization process (roadways leading to unloading facilities, washing stations, phyto tanks, etc.)", the Director adds. "We also work for the SNCF, cutting tracks, level crossings, accesses, etc. We are currently working on a large-scale project for a nursing home in Cognac, carrying out earth moving and roads and utilities works", he goes on to say.

GUERIN TP can depend on SARL MOTARD for all of its activities, having dealt with them for several years when purchasing their HYUNDAI excavators. The first one, acquired in 2016, is a 3-ton R27Z-9 model that the company earmarked for interior demolition works, in particular for concrete vats. Equipped with a concrete cutter, it clocked up 800 operating hours in its first year. "The operators are very happy with it", confirms Frédéric Guérin. Two further excavators, an R30Z- and an R80CR-9A arrived last November.

"These machines are perfect for our day-to-day activity. The cabs are spacious, comfortable and maintenance is simple. As for the SARL MOTARD dealership, they are very responsive when we need them, we have a fantastic working relationship with their sales representative Jérôme, which is very important. Plus, my operatives rate the machines highly, which is also important as an operative who does not appreciate an item of plant machinery will either misuse it or be hesitant to use it", comments  Frédéric Guérin.

The company's personal little touch: the excavators are painted green. "Our excavators don't go unnoticed in the region; we changed from the customary yellow/orange of the TP machines to green. In 1978, my father began to want to stand out, so he painted his first truck, which in itself was revolutionary at the time! In 1998, he went on to paint his first excavator. Initially, we used a pale green but it didn't age well, so in 2007 I had it repainted dark green, the color of hope! ", the Director recalls.